Welcome to the Clinical and Criminal Mind!
As someone who eats, breathes, and sleeps psychology. I felt the need to inflict my professional, research, and clinical interests on the rest of the world via blog format (as if my social life wasn’t in crisis enough anyway!).
Here on the clinical and criminal mind you will find an assortment of mind blowing (Well interesting…) cases, theories, and information related to all things Clinical and Forensic psychology. Blog posts will range from core/classic cases & theories, right through to new cases/theories and upcoming advancements in the respective fields.

“Blah blah blah” you say! “What can I actually expect?” Well here’s some examples of what you can expect from the clinical and criminal mind:
Forensic:

“The Bystander effect and diffusion of responsibility”

And many more things to come as well!

How many times when we were children did we all lie in the bed with the flu and have our parents look after us? (I would still do it now at the age of 24 if my parents didn’t live at the other end of the country!) It might have been that time when your mother brought you soup, wiped your forehead, and sang you a sweet lullaby?

Munchausen by Proxy Syndrome (MbPS) or “Factitious Disorder by proxy” is a psychological disorder characterised by a care giver (most commonly the mother) faking, exaggerating, or inducing psychological/physical illnesses on those they care for (usually their children).  The main motive for this behaviour is to gain attention and sympathy from others around them.  This is what distinguishes Munchausen by Proxy from other forms of child abuse (the drive and need for attention from those around them, as opposed to just inflicting harm/control) in mild cases the caregiver will fabricate or exaggerate symptoms of illness in their loved one, resulting in the child having to have multiple medical tests and in some cases operations!  In the more severe cases of MbPS we see the caregiver actually causing the sickness, in some cases resulting in long term health problems or even death!

There is a lot of controversy regarding Mbps and whether or not it is a genuine psychological disorder or a scapegoat to avoid longer prison sentences or even criminal imprisonment altogether. As well as this, there is sometimes uncertainty as to whether child abuse was involved or whether sudden infant death syndrome was the cause of death in the most severe cases. This has often caused a lot of problems within criminal justice systems and judicial proceedings.  Lets take a look at a high profile case related to Blanca Montana (Pictured Below:Photo Credit: Arizona Daily Star).

Blanca Montano was a mother who brought her children to hospital in 2011 (Arizona, USA), stating that they were both displaying illness and flu like symptoms.  Both children received blood tests and were diagnosed with an E-coli infection, and treated.  Montano’s son made a full recovery after successful treatment, but Montano’s daughter (5 months old) appeared to be getting worse rather than improving.  Whilst the baby spent time in the intensive care unit she contracted multiple bacterial infections, in rapid succession of one another. This was obviously alarming to medical staff, and further tests could not determine what was causing the vast amounts of infections.  It was during this time clinicians became suspicious of Blanca, whom was having problems with the child’s father (trouble letting go of him, and the romantic relationship!).  It appeared to clinical staff that Blanca was trying to gain attention from the child’s father and attempt to win back his affection via. the deteriorating health of their daughter.  After placing a camera in the ICU room and recording for several days, footage showed Montano fiddling with her daughters IV drip and then covering the lens of the camera (a nurse claimed to have found syringes in Montano’s possession!).  This was enough evidence for police & child protection services to intervene, restricting Montano from visiting her daughter. Unsurprisingly (-.-) the daughter started to show signs of recovery without her mothers interference (making a full recovery!).  Long story short, Montano was found guilty of  child abuse and sentenced to 13 years in prison.

Right so a bit of a break from fact feeding and story telling. The case above seems pretty clear cut and obvious that the mother was displaying MbPS.  It was also pretty clear cut that the mother was causing intentional harm to her child and tampering with the child’s recovery and care.  But are all MbPS cases correct? are they all clear cut?  Do the health professionals make mistakes? (WARNING!: MORE UPCOMING CASE TELLING! please hold out I promise there is light at the end of the tunnel…)

Sally Clark (Pictured Below: Photo credit: Reuters.com) was a solicitor in the UK accused and convicted of murdering her two sons as infants.  The circumstances of the death of the babies was related to breathing problems (both babies a year apart from each other).  Police found it difficult to believe that two children could die under the exact same circumstances and arrested Sally on suspicion of murder.  Sally was found guilty based on the opinion and evidence of Sir Roy Meadow (prestigious Paediatrician and expert in the field of MbPS) stating the criteria met MbPS, and that the chances of 2 babies dying of SID (sudden infant death syndrome) in the family and home was a 1 in 73 million chance.  Clark was portrayed as a depressed, alcoholic who hated her children whom she had to give her career up for.  Sally was convicted to life in prison. 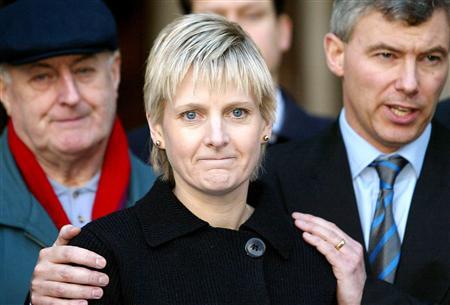 It was only when during her second appeal that this sentence was overturned.  It was found that Sir Roy Meadow had miscalculated his information, as well as the pathologist (Coroner for you Americans!) failing to produce a report to state that one of the children had suffered from a bacterial infection, which most likely led to death by natural causes.

This was not a case of child abuse and MbPS, and sadly resulted in Sally Clark never recovering and dying of alcohol poisoning in 2007. Both Meadow and the pathologist received medical sanctions regarding serious medical misconduct.  Meadow as a result was removed from the medical register (although reinstated a year later!!!) and the pathologist was banned for 3 years!

The Sally Clark case is one example of how MbPS can be misinterpreted even by leading experts, the causes of death appeared to be natural when all facts were made available! Was Sally targeted due to her Postnatal depression & problems with alcohol? Was Meadown the leading expert too quick to jumpy to assumptions without full information?

So what do you think?

Is MbPS a valid psychological disorder?

is it an excuse for a mother to commit murder?

When most people hear the term “Psychopath” a number of distinct examples resonate within their minds.  Perhaps real world examples such as; Charles Manson who managed to control, charm, and manipulate a group of people to commit murders; or Jeffrey Dahmer who targeted, murdered and consumed young men (Yes he ate the flesh and organs of his victims!).  Even if we turn to the media we are exposed to psychopathic serial killers with famous cult examples such as; Hannibal Lector (Silence of the lambs- incredible film by the way!) or Norman Bates (Psycho).  Basically we can all name or refer to someone whom we believe to be a “Psychopath” especially in particular serial killers.

But other than murder what characteristics actually define these serial killers? What do these individuals all have in common?

Hervey M. Cleckley (circa 1941) was the first individual to provide a clinical description of psychopathy with his book entitled the “Mask of Sanity” (the idea being that a psychopath may appear normal but this is a mask hiding a psychiatric disorder).  Feel free to check this out if you would like some initial background on psychopathy.  In this blog post I will be focusing on Robert Hare’s creation of the Psychopathy Checklist-Revised (PCL-R), which is most commonly used in this day and age to characterise and measure psychopathic traits.

The PCL-R assesses and measures psychopathic traits based on 20 items, these items consist of personality and behavioural characteristics (based on Hare’s work in prisons interviewing inmates). This information is usually collected and defined through an interview (as well as prev. risk assessments & documentation) with the individual/inmate regarding characteristics listed below:

In the UK an individual must meet a minimum score of 25, whereas in the US an individual needs to meet a cut-off of 30.  Each item is rated a score of 0, 1 or 2 (0 if the item does not apply at all to the individual, 1 if there is partial or mixed information, and 2 if there is a reasonable or good cause to believe a match with the individual) with a total score of 40.

Okay so by now you are probably bored to tears of hearing about scoring and the measurement of interviews (Not the most interesting of subjects I know!).  So how would this apply in a real life case scenario?!  Well lets take a look!

I’m not going to go into too much detail about Aileen here as (SPOILER ALERT!) I will be doing a case study on her in this blog in the future.  But how do these criteria connect to her? Below is my own (amateurish!) attempt at the PCL-R (sadly without being able to interview Aileen!) based on research regarding her behaviours, life and thoughts.

Based on my score of 34 we can see that Aileen would be within the Severe range of the Psychopathy scale, displaying Severe psychopathic personality/behaviour traits.  It is also interesting to state that research by Myer et al (2005) completed a PCL-R of Aileen and rated her as 32 (Okay I didn’t get it right -.-, but not a bad job for an amateur!).

A lot of our society will register to some degree on  the PCL-R, and most people who meet psychopathic criteria are able to live functional and stable lives (Take your boss for instance, or that CEO of a major corporate firm!) but this will be covered in a future blog! Basically not everyone who meets psychopathic criteria will go out and murder people! There are other extraneous factors involved: Genetics, Abuse, childhood upbringing, mental illness etc.

So have a bit of fun, where do you think you rate on the PCL-R? Are you an psychopath? Do you have the same traits as Aileen or Charles Manson?  Give it a go, you might learn something new about yourself…